Volbeat will perform at rfp!

Danish heavy metal band Volbeat will come to us at Rock for People in the summer. The popular crowd around frontman Michael Poulsen regularly heads europe's biggest festivals such as Rock im Park, Nova Rock and Graspop, and this summer their performance will culminate in Rock for People on Friday.

Volbeat is a band that has decided to ignore musical boundaries and prejudices about boxes in musical styles, because their rarity lies in the combination of rockabilly, metal and the original rock&roll of Elvis Presley or Johnny Cash. Thanks to this, in 2014, the Grammys earned a Grammy nomination for song "Room 24" in the category "Best Metal Performance" and sold over 2,800,000 albums. "I saw them two years ago at Rock im Park, Germany, which was then headed alongside red hot chilli peppers and black sabbath. It's a phenomenon and their popularity in Europe is huge – at the time of their set, the other stages were semi-empty, because they all had to see Volbeat!" says Rock for People boss Michal Thomes 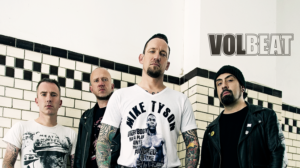